Almost Wednesday, but thought I would post this anyway. 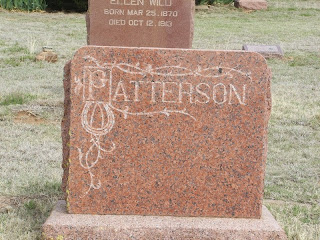 This is the Red Granite marker for the Patterson family plot in the Rock Cemetery located in Granite, Greer, Oklahoma. 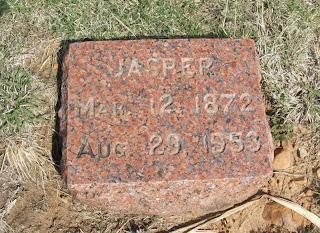 This is the marker for my Paternal Grandfather's grave.  Jasper born March 12, 1872 and died Aug 29th, 1953. Here is the biography I wrote for findagrave.com:

Jasper Patterson was the son of Greenup Bird Patterson and his wife Elizabeth Wigham Patterson. He grew up as a farmer and is listed on the 1900 census as a farmer in Hays County Texas with his wife Katie Hasson Tadlock. By the 1910 census he was listed as a blacksmith. I remember as a small child visiting Granite Oklahoma and being taken to see a wrought iron gate that he had crafted. His wife Katie died in 1913 from childbirth fever. He married again I'm not sure what her name is but she didn't live long. Jasper raised his kids mostly by himself with the help of family. 1920 census he was living with his oldest son and his wife. In the 1930 census he was living with his oldest daughter and her family in Indianapolis. He was listed as a blacksmith in an iron foundry. But had not worked the day before. (I found an article that referred to the foundry being closed during the depression and resuming production in 1932). I met my grandfather in 1949 but he didn't remember my father so don't know much more. I remember my dad getting the phone call telling us he died, but I don't know exact date. A Cousin who went to the funeral told me he was buried in Rock Cemetery.His children were: Greenup Bird PattersonMaggie Patterson RanckMelvin Davis PattersonCarter PattersonFlorence Patterson Pendergraft HildenbrandJohn Kenneth E Patterson

A side note about the red granite that the town was named for.  I'm happy to have a baseball sized polished ball of this granite that my father had.  Think he must have gotten it when we were there in 1949.  We lived in San Diego County and only got to take a trip back East once with my Dad.  We got to visit with his Brother, Kenneth; Sister, Florence in Oklahoma and Texas; his Sister, Maggie in Indianapolis;  and my Mother's family in Ohio, Michigan, Kentucky and Mississippi.

As a serious amateur photographer, I have to remember to give credit to findagrave.com contributor, Rita Collvins Mayfield for taking these photos
Posted by Gerryruth at 12:20 AM No comments: